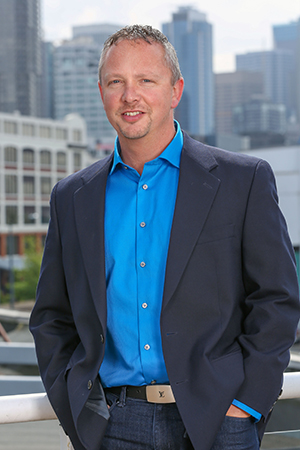 Chad began working with John Goodman in 1998 as an Acquisition Underwriter in what was then Goodman Financial Services. After five years away as an Investment Manager for Schnitzer West, he returned to GRE in 2006.

As the Director of Asset Services, Chad manages a multifamily portfolio of approximately 3,000 units and specifically enjoys completing acquisition rehabilitations. Chad is responsible for the asset management of the firm’s investments and plays a key role in our growth and success. Known for his financial strength, Chad has a knack for reviewing and creating financial reviews of properties. Chad is passionate about creating value and enjoys improving the efficiency, leasing ability, and value of a property.

Chad holds a degree in both Economics and Business from the University of Washington and is a CPM candidate. He is actively involved with the National Association of Industrial and Office Properties (NAIOP), Institute of Real Estate Management (IREM), and the Building Owners and Managers Association (BOMA). Chad participates annually in the Space Needle “Base 2 Space” stair climb to benefit Fred Hutch Cancer Research Center. Having seen several friends and family members affected by cancer, Chad’s competitive nature motivates his fundraising efforts. During the inaugural event, he is proud to say that he was the #1 overall fundraiser. Since then, he has consistently been one of the top 5 fundraisers every year, raising approximately $18,500 over the span of 3 years.