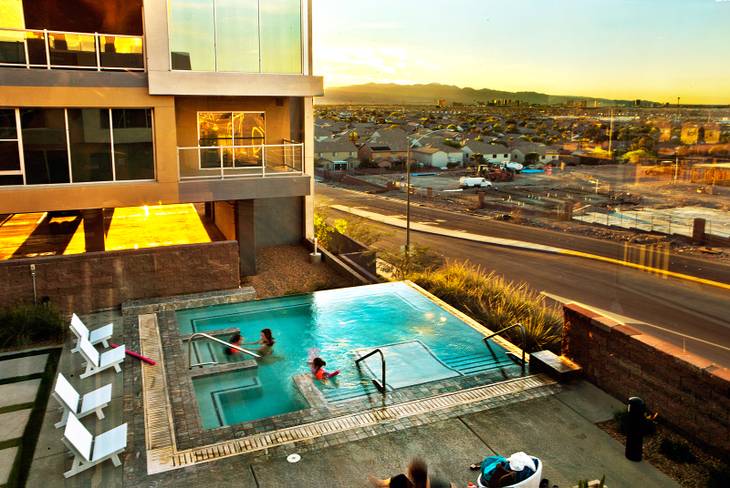 Luxury Henderson condo complex is sold for more than $38 million

Vantage Lofts was a mothballed condo complex, abandoned during the downturn, and after changing hands a few times became one of Southern Nevada’s most expensive rental properties.

Now it’s been sold again, and like the renters at Vantage, the new owners are paying top dollar.

According to a draft news release, Bascom acquired the complex and a 4-acre parcel of land — entitled for multifamily development — through a venture with Los Angeles investment firm Oaktree Capital Management. They paid $39 million total, according to the companies.

The groups spent $347,000 per unit for Vantage. That’s more than four times the average rate — about $85,000 per unit — that investors have been paying this year for Southern Nevada rental properties, according to Colliers International data.

Bascom has acquired more than 70,000 apartment units in 12 states since its founding in 1996. Vantage, however, was “one of the most amazing buildings we’ve ever seen,” said Scott McClave, senior principal of transactions and finance for Bascom.

Perched on a hill at Gibson Road and Paseo Verde Parkway, with sweeping views of the valley, Vantage has gourmet kitchens, floor-to-ceiling windows and a sleek pool area. If the property were in, say, west L.A. — a far more expensive market than Las Vegas — it would sell for $1.5 million per unit, or $165 million, according McClave.

The purchase, from Seattle investor John Goodman, who bought the partially built complex in 2013 and completed it, is the latest bet on the valley’s apartment sector. The multifamily business is one of the most-robust aspects of Southern Nevada’s real estate market, marked by heavy construction and landlord acquisitions the past few years.

Investors have piled in because many people here are unable to buy a home due to shabby finances and because many others prefer to rent, amid a broader trend nationally of slumping homeownership rates.

It’s also a gamble that, even though Las Vegas’ economy is wobbly and packed with lower-paying service jobs, there are enough people here who are willing and able to pay thousands of dollars a month to rent a luxury apartment in a housing market dominated by subdivisions with single-family homes.

Goodman, however, found dozens of customers. With average monthly rents of about $2,500, Vantage is roughly 93 percent occupied, McClave said.

Earlier this year, peak rental prices at Vantage topped more than $4,500 per month. By comparison, Southern Nevada apartment landlords charge an average of $889 per month, according to Colliers.

“There’s a slice of society that makes pretty good income, and if you want something unique, this is unique,” McClave said.

The Sun reported in March that Goodman was under contract to sell Vantage. Neither the buyer’s identity nor the sales price were learned, but brokers had said that Goodman was seeking at least $44 million, and the listing broker had said he expected the deal to close in 45 to 60 days.

Bascom is no stranger to Las Vegas; it owns eight other apartment complexes in the valley, and co-founder Derek Ming-Dar Chen lives here. The company even made an offer for Vantage a few years ago, but Goodman “was already tying it up,” McClave said.

His group plans to own it for three to five years and will continue renting the units, McClave said. Bascom executives liked the property because they could eventually sell it to someone who might want to revert to the original developer’s plans and sell units one by one, and because the 4-acre parcel next door could hold more units if Bascom decides to expand Vantage.

They also bought the complex for much less than it would cost to build a similar property from scratch, McClave said.

“It’s a world-class building we bought for 50, 60 cents on the dollar. … That in itself is pretty exciting,” he said.

Buyers hunting for “quality properties” are looking in the valley, as deals are cheaper here than in such places as Denver, California and Phoenix, where prices are “nuts,” said Las Vegas broker Perry White, a vice president of investments with Marcus & Millichap.

Still, he said the Vantage deal “sounds like a risky investment,” given how much was paid and the small pool of potential renters.

Ten years ago during the real estate bubble, when prices for everything were soaring, apartment buildings sold for as much as $200,000 to $250,000 per unit, but not at the level Bascom paid last week, White said.

“I don’t remember anything being that high,” he said.

Slade Development built Vantage during the boom years, with condos priced from $400,000 to $1.6 million. It was scheduled to open in 2007, but Slade mothballed it, partially built, in 2008 and filed bankruptcy for the project that year.

Vantage sat untouched for years, a visible scar of the building bust. In 2012, Rothwell Gornt Cos. bought it out of bankruptcy for an undisclosed sum. Company principal Rich Crighton later said his group planned to spend $15 million to finish Vantage, but instead he flipped it to Goodman, founder of Goodman Real Estate, who paid $10 million for the property.